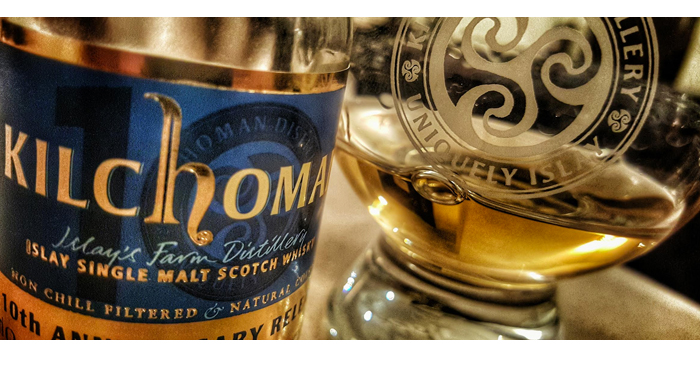 Review
Kilchoman is a quaint little distillery that has defied the odds and is fast becoming a name to reckon with.

Good quality whisky making that is leading the way in making people realize that age is but a number. And by that I don’t mean they’re churning out NAS statements like everyone else out there.

They take pride in telling people the exact age of their whiskies. From the time of distillation to the exact day of bottling. They don’t hide behind fancy marketing jargon and instead let the whisky do the talking.

And for that they have my respect.

Their whiskies remind me of old school Ardbegs with their Islay grist and barley smokiness beautifully balanced with a woody sweetness. After an initial run-in with a couple of less than stellar bottlings I am now a fan.

I picked up a mini of the 10th Anniversary bottling when I visited the distillery during my Islay visit last month for the Festival. And since I’ve already made it clear that I’m a big fan this particular bottling comes as a bit of a disappointment.

To mark 10 years since it opened it’s doors the distillery, along with it’s official single cask Feis Ile bottling, released a special expression with whiskies from each year starting from 2005 until 2012 from both bourbon and sherry barrels.

My sample is from a 50ml mini purchased at the distillery and bottled at 58.2%

Palate: Good weight. Initially the mouthfeel is great. But then you get this wave of bitterness. I have never tasted a whisky this bitter ever. I try and get some fruits but, my word, there is something wrong here. (18/25)

Overall Comments: Such a shame about this expression. There is definitely a bad cask in here somewhere and there’s lots of it, too. A great idea marred by a miscreant. But that’s not going to stop me from being a fan. In fact it tells me the guys over at Kilchoman are human.