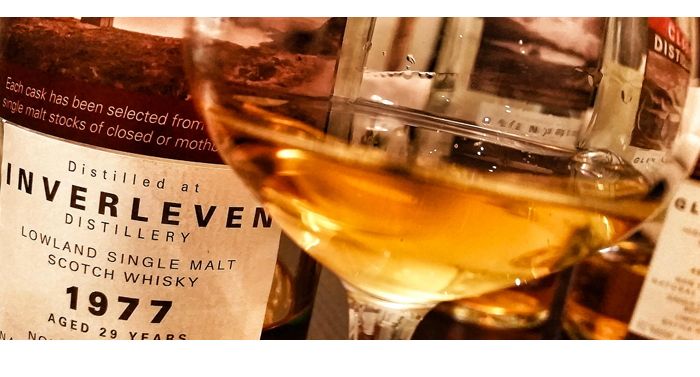 Review
This is part two of three independent single malts I tasted with a group of whisky enthusiasts one evening. All part of the Closed Distillery series from Part Des Anges.

This is the closed distillery of Inverleven aka Dumbarton which operated between 1938 and 1991. Michael Jackson considered it a Lowland even though the nearby distillery of Loch Lomond is considered a Highland. Since it’s on the border of both it’s regionality will always be up for debate.

Inverleven was part of the the Dumbarton Distillery complex. At one point it was Scotland’s largest grain whisky producer churning out whiskies for blending for George Ballantines.

Some of the old pot stills of Inverleven were sold on to Bruichladdich shortly after the distillery re-opened, along with a lot of second hand distillation equipment. In fact Port Charlotte is made using the old Inverleven stills.

This particular Inverleven is a single cask bottling and served at a cask strength of 54.8%

My sample is from a brand new bottle.

This is yet another solid whisky from Part Des Anges. I’ve had only three of their offerings but the consensus that evening was that all three were rock solid.

I love the mesmerising way whisky falls into a glass. Read my review of the #Inverleven 1977 #partDesAnges #SingleMalt #Scotch #Whisky maltactivist.com