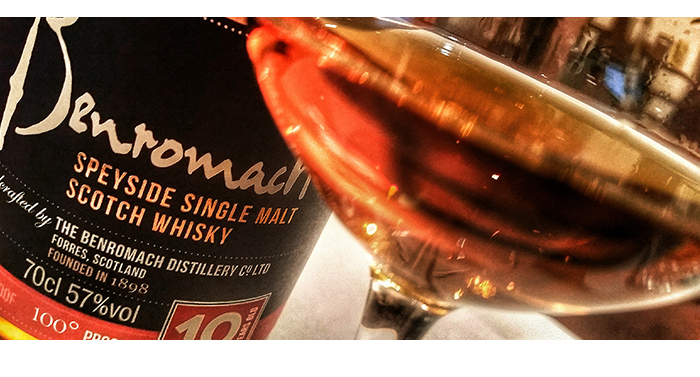 Review
This whisky is the reason I take time out from my busy schedule and inflict slow damage to my liver. Just to let my whisky colleagues know that there are treasures out there simply waiting to be discovered.

I’ll be honest. Benromach was not on my radar as a must-try. I was going to get there eventually but I was in no rush. But then Ralfy decided it would be a good idea to declare their 10 year old as his whisky of the year. While I usually scoff at such titles Ralfy is a dependable chap.

So I decided this was a good time as any to put his claim to the test. So while I was in the process of procuring said title holder I saw this particular expression sitting by the 10 year olds’ side. Labelled as 100 proof it came in at 57% compared to the measly 43% that the standard 10 year old was bottled at.

What I love is that Benromach has decided to re-create the classic Speyside flavors of the 60s which means that there is a small amount of peat used in the barley (12ppm in the final product to be exact).

This 10 year old spirit is a blend of 80% bourbon and 20% sherry hogshead married together for it’s final year in first-fill Oloroso sherry casks. My sample is from a brand new bottle dated 25.09.2014

Nose: Crisp sherry. No off notes here. Green tobacco leaf. Chocolate. Oak. Dates. Dark fruits. Cinnamon. Some fudge. Dark currant jam. Strawberries. Red apple. Vanilla. Let it breathe and it becomes a little more savory. Fresh green peas. Hint of ginger. Gets dry over time. This such a beautiful nose. It’s not overly complex. All the aromas are on point and beautifully represented. This is close to being perfect.

This is an insanely beautiful whisky. Hats off to Benromach (and G&M for reviving it) for embracing traditionalism in favor of mass production and NAS profits. Truly a masterclass in elegance and a glimpse into the glorious past that is Speyside whisky.