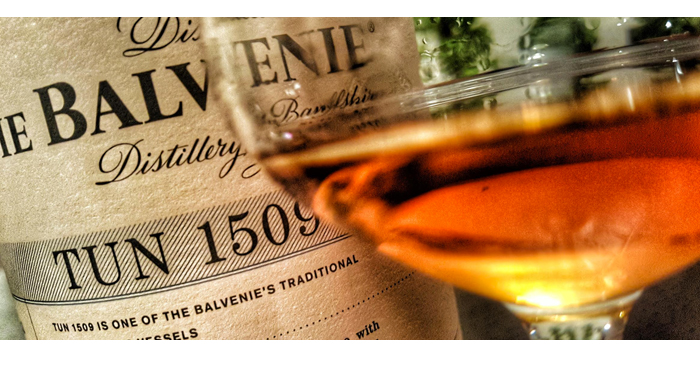 Review
Balvenie is my go to expression when I’m not sure what I want to be drinking. I’ll normally pour myself one as I sit down and ponder. I find that their dependable and comfortingly familiar flavors help me get in the mood for a drink.

The Balvenie 17 Sherry Oak and the 21 Portwood were one of my first ever single malt purchases and what excellent purchases they turned out to be. A solid core range with classic Speyside flavors Balvenie doesn’t give itself a chance to go wrong very often.

The Tun series is quite a nice little concept where David Stewart (Master Blender of Balvenie) picks out a bunch of Sherry butts and Bourbon barrels and marries them in a much larger vessel (the Tun) for a few months before bottling them.

The first in this line was the Tun 1401 which was the name of the 2000 litre vessel in which Mr Stewarts selection was left to marry. So insanely popular was this series that Balvenie was compelled to knock out no less than nine different batches. Each one causing a minor uproar every time it appeared on auction sites.

The next was the Tun 1509 which is an 8000 litre vessel. For Batch 1 Mr Stewart went with a total of 42 different spirits; 35 from ex-bourbon barrels and seven from large European sherry butts. Each cask number written on the label – much to my appreciation. The whisky was left to swim around and get accustomed to each other for a few months before seeing the light of day.

The much larger output may have successfully killed the second-hand / auction market for the Tun series and for that I’m quite glad because the 1401 had reached prices of stupidly epic proportions. But that may not be the only reason for it’s relative lack of demand. For while the 1401 batches were by and large quite tasty this particular expression is not quite in that league.

My sample is from a brand new bottle with a strength of 47.1%

Palate: Such a creamy mouthfeel when it starts off. But then an unwanted bitterness creeps in and layers all the flavors. Coffee. Cinnamon. All spice. Oak. Quite savory unlike the nose. Blood oranges. Unsweetened plums. Maybe the nose set it up way too high and the palate just could not compete. What ever the case I felt a little let down at the lack of complexity here. (21/25)

Overall Comments: I wish this whisky was sweeter. The nose promises a different ride to the one you actually get. Which is a little sad. It’s not terrible, mind you, but I was so looking forward to this blowing me out of the water. And at around 250GBP per bottle it had better.