Review
Let me just come out and say this. Springbank is tied with Ardbeg and Amrut as my favorite distillery in the whole world. Not only are they a genius distillery (creating three expressions from the same equipment!) they also claim to be the only distillery that performs the complete production process in its own facilities — including floor malting, maturation, and bottling.

Add to that their consistently brilliant flavors and you’d guess why I hold them in such high esteem.

Now here I was ready to test the flagship 21 (complete in blingy gold packaging). This age is a bit of a legend and there are many versions of this 21 year old spirit.

They were bottled in dumpy bottles during the 1980’s. After that, regular bottles appeared with a cardboard box and slightly different printing, first with a jagged label and then with a straight cut label. In 2005, the last batch was released (2400 bottles).

Since the distillery was closed between 1979 and 1989 it was only very recently that the 21 hit the market (2011) again. Now I never got the chance to sample the pre-2005 expressions but if this is any indication then they must have been gorgeous.

The liquid has been matured in both fresh and re-fill sherry casks.

Nose: Brilliantly balanced sherry with hints of black peppercorns. There’s a touch of smoky meat stew with underlying salty peat. But it’s the fruits that bring up the rear so admirably. Red apples and bears mulched with a honeycomb sweetness that make you savor the nose longer than most whiskies.

Palate: Crisp dark honey with pepper dust. There is that mild salty peat again but now with a lovely woody chocolate cinnamon paste. But it’s the perfectly balanced consistency of liquid that forces you to hold on to it for so long.

This one reminds me of the 18 a lot but there must be something in that extra three years that make this one that much more complex. Don’t be put off by the snazzy gold packaging. It’s the spirit inside that is pure gold. 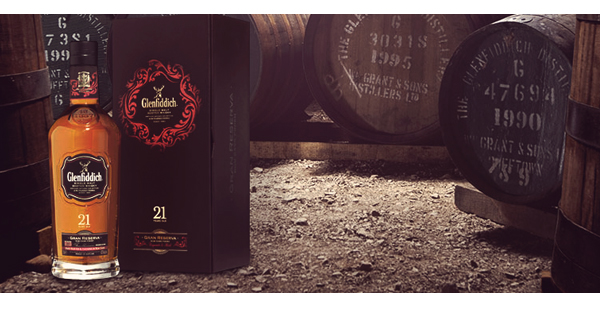 Review
Now here’s another distillery that is owed a lot by single malt snobs all over the world. Thanks to Glenfiddich, and their enormous marketing budgets, the world has some idea of what single malts are.

This interest keeps the industry alive and allows nerds like me to savor the fruits (or should I say nectar?) of this labour of love.

Now I’m not saying Glenfiddich are only popular on the back of the marketing dollar (unlike other distilleries). No. In fact they are one of the only mass produced whiskies with a truly remarkable level of quality and craftsmanship. Their core range and recent experiments are all extremely competent.

Which brings me to this 21 Year Old Caribbean Rum Cask finish. Had at a tasting recently this is a wonderfully crafted expression. After spending close to 20 years in bourbon barrels it has been finished in rum casks from Sancti Spiritus in Cuba for period of 5 to 9 months.

The result is pure toffee.

Nose: Toffee. Lots of it. A lot of bananas, apricots and blood oranges. All smeared with toffee. Chocolate fudge cake with dates sealed in a box of Quality Street. Hint of salt with a touch of ginger.

Palate: Smooth and creamy delivery of dates and cherry liqueur. The ginger is back and it’s grated on top of the toffee bananas. Finally black pepper on Quality Street with a hint of mint. This is a super robust delivery.

Finish: The woody chocolate peppers are long and true.

A fantastic dram that holds aloft the brightly burning torch that is Glenfiddich. 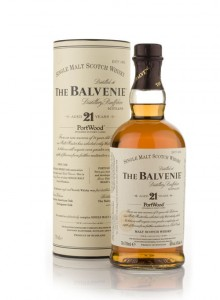 Review
Early on in my days as a malt enthusiast (read freak) I was always on the lookout for Jim Murrays’ 93+ point whiskies and this 21 year old port finished Balvenie was on top of my ‘must buy’ list. So imagine my utter delight when I discovered this at the Duty Free during one of my travels.

As expected I had no idea what I was drinking. Not only that, I had the audacity to write a three line review and post it for all and sundry to see. I praised it but had no inkling why I was praising it.

Today I know why.

Nose: Robust. Confident. As you would expect a 21 year old to be. A whisky, that is! The port finish comes through on the back of remarkably balanced cocoa beans and fruit cake wrapped in chewy toffee. Then there is the sweet beeswax complemented by gorgeous red apples and a teasing cinnamon spice. And grapes. Lots of grapes. Dark grapes.

Palate: Beautifully textured. I know it’s medium-bodied but the palate is sending thick syrupy signals to the brain. Must be all that cocoa, thick grapes and warm apple stew covered in salty nuts.

Finish: Long and seductive. The cinnamon fruitcake is back and renders you almost incapacitated.

This is truly an example of what real magic must feel like. 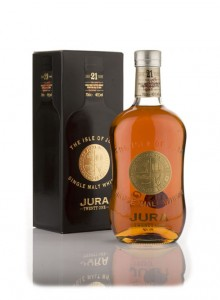 Review
Mr Richard Paterson, who I’ve met at a tasting, seems hell bent on hiding behind intensely sweet flavors. Some time he does a decent job. Most times he doesn’t. This time I think he just might have succeeded.

The peaty sweet nose has all the trademarks of a Paterson expression. Earthy molasses and jaggery with a hint of something floral followed by a not-so-nice sprinkling of dusty talcum powder. A bit confusing for my liking.

Strong spicy nutmeg on the palate gives way to a thick dollop of jaggery mixed with dry nuts and wild berries.

The finish is long, oily and spicy with a hint of dark chocolate. All yummy flavors on paper but never in harmony when you taste them.

Review:
I was a bit hesitant to try the Royal Salute 21, being wary of gimmicks and marketing led premium prices that dominate the upper end of the blends market.

What I discovered was an excellent surprise!

A fragrant and uncomplicated nose of pleasing aromas. The first thing you get is lemon and honey followed by a toffee sweetness. There is a faint touch of freshly cut grass and sugarcane accompanied by the tiniest wisp of smoke.

The palate is what the brilliant Strathisla Distillery is known for: toffee, vanilla and butterscotch. Some times it’s nice to go back to the tastes that lured me into malt drinking in the first place. As you savor this basket of sweetness a deft touch of smoke at the end reminds you that there’s an Islay in there some where.

This is an excellent blend which I feel is quite malt heavy; maybe that’s why it’s so smooth. At $150 it’s on the higher side but I think they compensate that with a pretty porcelain bottle and velvet packaging.

This Highland Park Full Volume is my find of the year. 17yrs old. First fill bourbon barrels. Not a single off note. Just poetry in motion. Find it. Buy it. Send it to me.
Glenfarclas Five Decades Tasting. One of the best tastings I've experienced. Set inside the distillery against the backdrop of a cold Scottish downpour. What more could you ask for? Perhaps something from the 50's !
What a stunning whisky this Lagavulin 19 is. If you can get your hands on it, that is. Perfectly balanced and so delicious.
Brought in the new year with this lovely Port Ellen 23 from Old Malt Cask. Set against some signature DXB fireworks!
Happy New Year!! Port Ellen set against some fireworks.
Bunnahabhain Mòine French Oak Reserve 2008 / released for the 2019 Feis. Evening continues with my main man @rkaushal75 The 2019 theme continues.
Loving this new Ardbeg 19! Chilling with my bro @rkaushal75 Today's theme is all whiskies with 19 in their name. Stay tuned.
Saying goodbye to 2019 with a couple of Ardbegs released in 2019. The Ardbeg 19 Traigh Bhan and the much awaited Supernova 19. Stellar drams from my favorite distillery. @ardbeg @rkaushal75 More to follow as the evening progresses.