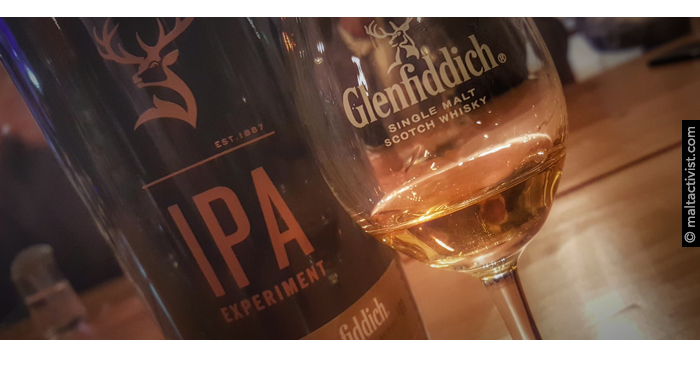 Review
For those of you unfortunate enough to read my reviews you know that I have always given Glenfiddich it’s due praise as being the giant that truly champions the single malt cause among the fickle masses.

For someone who produces such vast quantities of spirt for them to maintain that level of above average consistency is quite remarkable. I have not yet met someone who has anything bad to say about them. Sure, they might not have the stunners we seek every now and then but I think to be on average above average is no easy feat. And for that they have the tip of my hat.

Which brings me to this interesting new direction they’re taking. I like that because they’ve decided to take the odd risk every now and then. Having been shackled to their core range for the longest time they’ve decided to step out of their comfort zone and meet the new world head on.

And that comes in the shape of their new #Experimental campaign. This broad direction is taking everything from bartenders with crazy ideas to expressions that push the boundaries. Should some boundaries be pushed is a different matter altogether but I’m in favour of this new attitude in general.

Launched at the World’s Most Experimental Bartender competition, which I was fortunate enough to judge, we sat down with Dennis Pankratov, the Russian Brand Ambassador, to go over this anomaly. Matured first in bourbon, followed by 12 weeks in barrels that previously held an IPA and then back to bourbon for another few years. Notice the conspicuous lack of numbers here. Obviously pretty young.

Nose: Starts off similar to the 12 year old I feel. Youngish. But at the same time retains the signature green apples and pears that you find in the entry level. The similarity is quite strong. Vanilla. Custard. Also the barley is prominent. Not sure if that’s because of the IPA influence. Quite malty. It’s not a nose I look for in a whisky but it’s enough to keep me interested. 7.1

Palate:
I think the beer influence is stronger here. I don’t know if I have a great palate or it’s simply the power of suggestion. Again quite malty on the palate. But now with a touch of spice. Peppercorns. That dry ginger that I normally associate with Glenfiddich. Vanilla. Some more custard. Again, not something that’s going to blow me away but enough to keep me intrigued. Slightly better with a couple of drops. 7.1

Overall Comments: What do I think? I think why not. I like it when traditional tries harder. It’s a good sign. It reflects in the bottles which are by far the trendiest I’ve seen in a while (after Compass Box, that is). And the price point of 40GBP is almost a no-brainer. They’re obviously appealing to young voters thanks to the IPA touch and chic bottle style. And they’re the ones they have to impress. Not us irritating snobs pretending to have lofty standards.