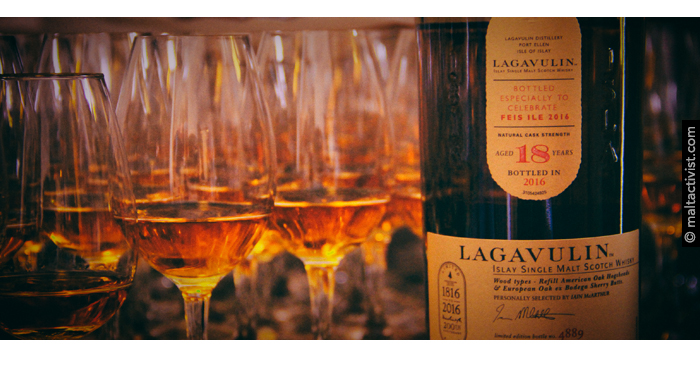 Review
For our trip to Islay for the whisky festival this year I ended up getting t-shirts printed with Malt Activist emblazoned on the front and the words The Perfect Dram / Feis Ile 2016 printed on the back.

Other than shameless self-promotion the idea was for the group to visit the island in search of the perfect dram. While there’s probably no such thing we did come quite close. Some in terms of the emotional draw they had for us and some simply for the quality of spirit.

This 18 year old from Lagavulin was one of the top contenders for The Perfect Dram simply because of how insanely good it was. 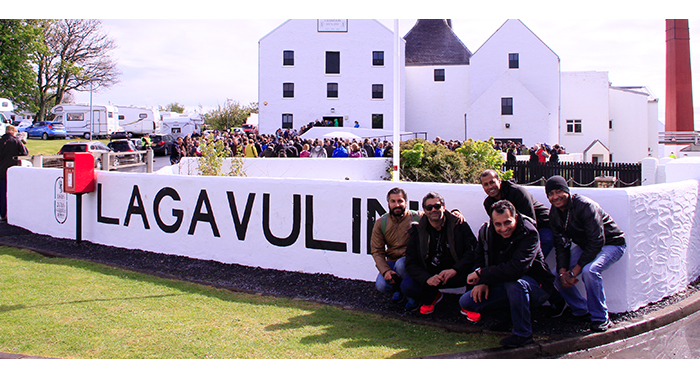 Having reached Islay a day earlier everyone woke up excited to an overcast day to visit their first distillery together. After parking two miles down the road we made our way to the small courtyard in front of the visitors centre where congregated over 300 odd whisky fanatics with half of them in line for the Feis bottle.

With waits of well over two hours to secure a bottle we said no thanks! and wandered around the grounds killing time before our Whisky & Bites tasting with a gentleman by the name of Dennis Mulder.

First we took part in a blind tasting (which I’m pretty sure I won – I’m just waiting for them to contact me) and and then spent twenty minutes watching a cooper put together a barrel. So far this was turning out to be a great day.

After countless drams of Lagavulin 16 and the Double Matured down at the warehouse it was finally time to meet Dutchman Dennis Mulder who was going to conduct the Whisky & Bites Masterclass. As we trooped into the malt room where the tasting was taking place the clouds burst again and showered us one last time before we went inside.

That would be the last time for four days that it would rain again.

We were ushered inside and were greeted with two extremely long tables where sat around 50 odd people. In front of each one were five drams. From L to R : Lagavulin 8, 16, Double Matured, 12 CS 2015 and this beautiful 18 year old released as this years’ Feis bottle.

In addition to the whiskies the entire table was lined with different types of bites and we were encouraged to pair each one with the different whiskies. There was dark chocolate along with milk and a rather fatty white chocolate. Strong mint drops, pancetta and pecan nuts made up the other edibles on the table.

I only wish that the food pairings were specific rather than a free for all but it was our second day on Islay, the first distillery open day, in fantastic company among friends and so there was little reason to be fussy. 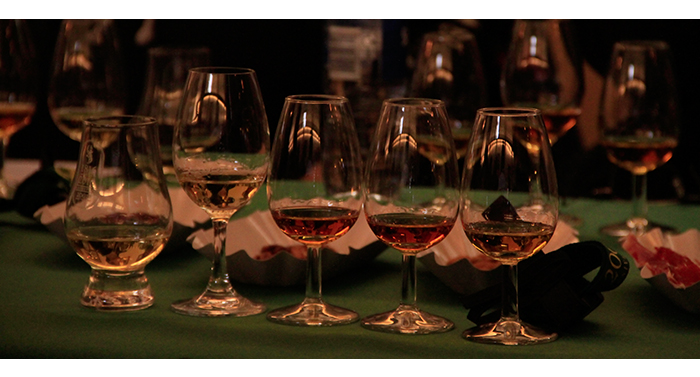 All of us decided to sample the 18 before any of the others especially before corrupting our palate with all those bites.

My sample is from an open bottle and served at 49.5%

Nose: The faintest of smoke. Delicate peat. The 18 years have really mellowed the spirit down. But it’s brought out so many other flavours. Crisp lemon. An even crisper lime. Small nectarines. Milk chocolate – but just a touch. Green apples. Green papaya. Olives. Let it sit and there’s a touch of something floral. Like white wildflowers. This turns to geranium after a bit. Beautiful nose. A very nice layering of aromas. If I didn’t have four other drams and 45 minutes before the session ended I could have sat with this for a while. 8.6

Palate: Bold. Strong. Full bodied. Coats the entire palate with a toasted white pepper oak. Sooty. Strong vanilla. Very creamy. Herbaceous. Those citrus notes are back. The lime. Lemon. And the nectarines. Confident palate. Doesn’t muck about with too many flavours. Everything is concise and in the right proportions. The best part. 9.0

Finish: Medium to long. Touch of oak. Nice and oily. Makes you want to chew it for a while. 8.8

Overall Comments: Lovely dram this. Just wonderfully crafted. Strong flavours all composed quite masterfully. Once again I am guilty of being partial to these set of reviews (the Feis bottlings) only because I have such vivid and fun memories of tasting these whiskies during my time on the island. But I won’t apologise for that.