Review
Bowmore has never really tugged at my heart strings even though I’ve given it enough opportunities. Though I must admit, of late, there have been some shining moments which have made me sit up and take notice. Most notably it’s Tempest series which is only going from strength to strength.

I stumbled upon the first release by chance and six releases later am still a fan. I think their Laimrig is also very nice. The Devils’ Cask too. Though I fail to understand it’s allure to so many people willing to shell out big bucks for it on the second hand market. It’s something like £500 on some whisky sites. It’s 10 years old guys and tastes very much like the cheaper Laimrig.

While some of their special releases do hold my attention it’s the core range that disappoints me the most. The 12 all the way through the 25 are lacklustre drams in my opinion. Of course I’ll be courting a backlash from the die-hards but so be it.

So there I was sitting in the Bowmore tasting room at the distillery on their open day with four drams laid out in front me. 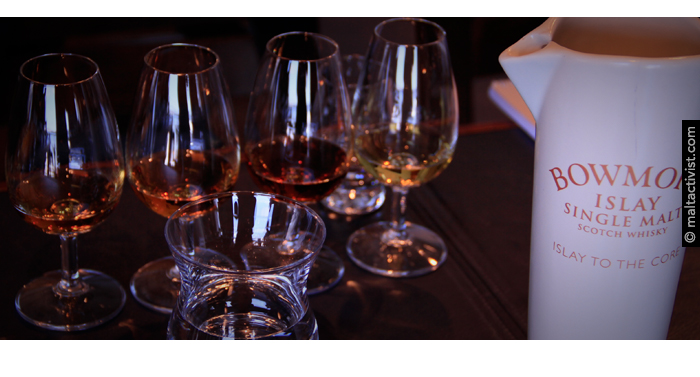 We had signed up for a single cask hand-fill tasting during our trip to the whisky festival and, never mind that it was 10.30 in the morning, all of us were sitting there rubbing our hands in anticipation.

From L to R we had a 2014 15 year old first-fill bourbon hogshead single cask, then a 13 year old Oloroso Spanish Sherry Oak, this years hand-fill the 17 year old matured in a PX butt and finally, as the surprise dram of the morning, this 25 year old Feis bottling.

I know a number of people who had lined up outside the distillery 16 hours before the gates opened to get hold of one of 200 bottles released. I was not one of them, mind you. But, hey, more power to you if you were and congrats on your purchase!

After tasting the first three (all very nice, by the way) we made our way to the star of the show. This cask strength 25 year old was first matured for 12 years in first-fill bourbon and then transferred to a Claret Wine cask for another 13. The result is an extremely sweet and spicy dram which just might have been over-powered by the wine influence.

My sample is from an open bottle and served at 55.7%

Nose: So sweet. Almost sickly sweet. Though just about manages to not be cloying. Just. Mulled wines. Hint of oak. Touch of all-spice. Black peppercorns. Soft red apples. Mushy red fruits. The nose is quite distinct, thanks to the Claret Wine. Though, this may have been a disaster if kept for another year. But it’s not. I think it’s nice. 8.2

Palate: Very creamy. I like the mouthfeel. Gets quite dry mid-palate. Those red fruits are back. Raspberries. Almost jam like. Cinnamon. Milk chocolate brownies. With water the ash comes out a bit more. As do the spices. I don’t like it as much as the nose. I think the Claret Wine influence is mighty strong and I like to taste the integrity of the spirit. Still, feels nice on the palate. 7.7

Overall Comments: So what do I think? I like it. I’ve heard it being slammed by some critics. Even some friends. But I’ll chalk that up to creative differences. I don’t think it’s worth waiting in line for 16 hours to spend £350 on it, though. But it’s not a disaster as some claim it to be. And, to be honest, the real reason is that I was in Islay sitting inside Bowmore tasting this with close friends. And that means a lot. Enough to award this more points than it actually might deserve. Deal with it.

This Highland Park Full Volume is my find of the year. 17yrs old. First fill bourbon barrels. Not a single off note. Just poetry in motion. Find it. Buy it. Send it to me.
Glenfarclas Five Decades Tasting. One of the best tastings I've experienced. Set inside the distillery against the backdrop of a cold Scottish downpour. What more could you ask for? Perhaps something from the 50's !
What a stunning whisky this Lagavulin 19 is. If you can get your hands on it, that is. Perfectly balanced and so delicious.
Brought in the new year with this lovely Port Ellen 23 from Old Malt Cask. Set against some signature DXB fireworks!
Happy New Year!! Port Ellen set against some fireworks.
Bunnahabhain Mòine French Oak Reserve 2008 / released for the 2019 Feis. Evening continues with my main man @rkaushal75 The 2019 theme continues.
Loving this new Ardbeg 19! Chilling with my bro @rkaushal75 Today's theme is all whiskies with 19 in their name. Stay tuned.
Saying goodbye to 2019 with a couple of Ardbegs released in 2019. The Ardbeg 19 Traigh Bhan and the much awaited Supernova 19. Stellar drams from my favorite distillery. @ardbeg @rkaushal75 More to follow as the evening progresses.