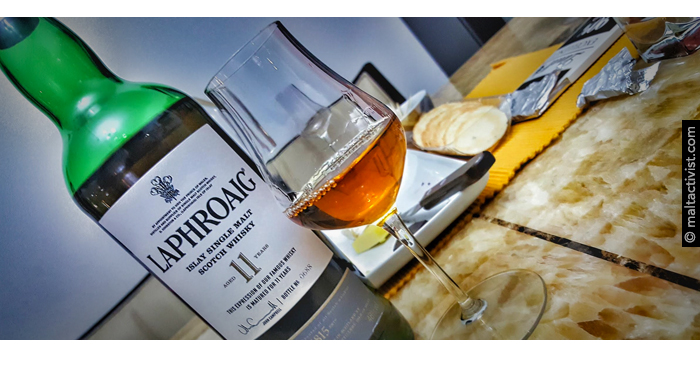 Review
Those who know me know that I have the softest spot in the world for Laphroaig. It was the first distillery that I had ever visited. I have had some of my best drinking experiences with whiskies from this iconic giant. Sure, like any other love affair, there have been low points in our relationship but those have largely been off set by some stunning spirits.

And since there’s very few recent Laphroaigs that I’ve not tasted I’m always jumping at the opportunity to sink my teeth into any latest offering from them and offer my unsolicited two cents. As was the case with this eleven year old travel retail launched exclusively for Amsterdam Airport.

I was at my friends’ house just ploughing through one independent after another when he put this on the table much to my glee. I had been meaning to get my hands on this but trips to Amsterdam are very few and extremely far between so it turned out to be a rather pleasant surprise.

Now I didn’t know much about this particular offering other than it was exclusive to Amsterdam but I swear as soon as I nosed it I blurted out the words ‘Triple Wood’ ! Upon further examination it was revealed that the maturation process of this and the Triple Wood is exactly the same. First-fill bourbon, followed by Quarter Casks and finally in European Oloroso Sherry, thereby, rendering both spirits almost identical.

This forces me to speculate that maybe my favourite distillery is simply coming up with creative ways of flogging the same spirit to different markets simply by using different labels. I can’t say I’ve not heard that before and, to be honest, it’s being done so much nowadays that it’s almost the norm. But it’s a little frustrating when you pay 150 Euros for an eleven year old whisky who’s taste profile is exactly the same as another NAS from the same portfolio and available at less than 40% of the retail price.

I expect something more and something unique if you’re going to name it and package it differently. Bit of a rip off if you ask me.

Nose: That extremely typical Laphroaig peat. Iodine. Liquorice. Red fruits. Pomegranate. There’s a certain thick sherry sweetness to it as well -like molasses. Nuts. Almonds, actually. Touch of milk chocolate. Malted milk (that’s the Oloroso sherry before it settles down) – like Horlicks. Oaky. Red berries. Black rock salt. Something mineral about it too. Sea washed pebbles. Kelp. And a coastal saltiness. Do I like it? Not really. It’s just so mainstream. 20/25

Palate: The same. Exactly as I imagined it would be. Red fruits. Berries. Tobacco leaf. Quite spicy. Very spicy infact. A red chilie spice – quite sharp. But mixed with milk chocolate. Touch of mint. And a really sharp betel leaf quality to it as well. Again, so expected. 21/25

Finish: Strange finish. Can’t quite put my finger on it. A bit out of balance. Oak. Quite oily. Cinnamon. And that sharp red chilie again. 21/15

Overall Comments: What am I supposed to say? It’s the Three Wood disguised as an eleven year old and sold at more than twice the price. Is that fair? Nope.