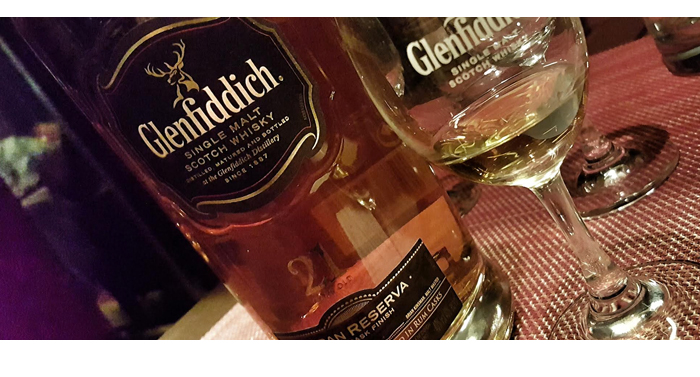 Review
There’s nothing I can tell you about Glenfiddich that you already don’t know. It is unquestionably the most popular single malt whisky in the world. They are by and large one of the most consistently above average whiskies produced given their staggering levels of output.

What I can tell you that you might not necessarily know is that I met their Global Brand Ambassador Mr Ian Millar a few months ago who is quite a proponent of whiskies with age statements. Barring a couple of new releases from them it seems that this is quite true for the distillery as well.

In fact I recently read they’re scaling up production to meet demand and more Glenfiddich in the world is, in my opinion, a good thing!

I was invited by our local distributor for an evening of tasting the classic Glenfiddich range which was quite nice. It’s quite common to give these expressions a pass just because they’re the most drunk whisky in the world. And you kind of forget why they’re No1. It’s because they are pretty damn good.

We started the evening with the 12 (average), moved on to the 15 (so good!), then the 18 (lovely) and finally the 21 year old finished off in Caribbean Rum Casks. My sample is from a brand new bottle and served at 40% ABV

Nose : Bananas. Toasted oak. Almonds. Walnuts. Cinnamon. Ginger spice. Now some vanilla. Chocolate. Coffee beans. Gets fruitier over time. Red apples. Berries. There’s something a touch sour. Don’t know what that is. And some mint leaf. I like it. It has the classic Speyside / Glenfiddich nose with a little sweet and fruity twist. 22/25

Palate : Quite oaky. I don’t like the delivery – it’s a bit thin. Black pepper. Cinnamon. Ginger. Wild berries. Mocha. Coffee beans. Chocolate. Ripe oranges and orange zest. This seems to me like a manufactured taste. Don’t know how to explain it but it just felt that the spirit was too restrained. Not the best part. 21/25

Overall Comments : This is half decent though I feel that the palate was a touch over-oaked and a bit thin. The general consensus among the group was that it felt like it was made to order. And by that I probably mean that all the flavors that are supposed to please me were there but for some reason didn’t work so well together. It’s not a bad whisky. It’s not awesome either.

PS : I just noticed that I have another review of the 21 year old which I did almost two years ago and it seems like I really liked it then. I can only assume there to be enough batch variance for me to have a much different opinion this time around. Unfortunately I can’t tell you the bottling dates for each. For all I know they are exactly the same spirit and I’m a complete idiot…