Is there such a thing as too much transparency?

According to the Scotch Whisky Association, which basically controls anything whisky related in Scotland including where birds are allowed to relieve themselves should they be flying over a whisky distillery, it is.

Because what has happened is that our friends over at Compass Box decided it would be a good idea to share with their consumers the exact composition of two of their latest blends, This Is Not A Luxury Whisky and The Flaming Heart 5th Edition. This was in a bid to be as transparent as possible about what makes up their artisan whiskies.

Their website essentially broke up the blend into various percentages of different whiskies used in order to give the most accurate picture to their consumers. Now this, apparently, is against SWA laws.

Magnus Cormack, SWA director of legal affairs, explained that under Regulation 12.3 of the Spirit Drinks Regulation No 110/2008, maturation period or age “may only be specified in the description, presentation or labelling of a spirit drink where it refers to the youngest alcoholic component”.

Which is basically to say that you are only allowed to mention the youngest whisky in the blend and not any others. This is also, apparently, an EU regulation repeated in the SWA rule book. And what is even more interesting is that an unidentified member of the SWA filed a complaint against Compass Box through the SWA citing far too much information being given out by Compass Box.

So let me get this straight. The rules state that it is illegal for companies to divulge in full transparency about a product that people are paying for. So, in essence, you are not supposed to tell me what is inside the whisky that I am, more often than not, paying top dollar for.

Flaming Heart 5th Edition
Here’s what Compass Box can no longer tell you, their customers: the 27.1% Caol ila is 30 YO whisky. The 24.1% Clynelish is 20 YO whisky. The 10.3% Highland malt is 7 YO blended malt whisky made up of whisky from Clynelish, Teaninich and Dailuiane; this whisky was finished in very active hybrid casks made up partially of French oak. Finally, the remaining 38.5% of Caol ila is 14 YO whisky. 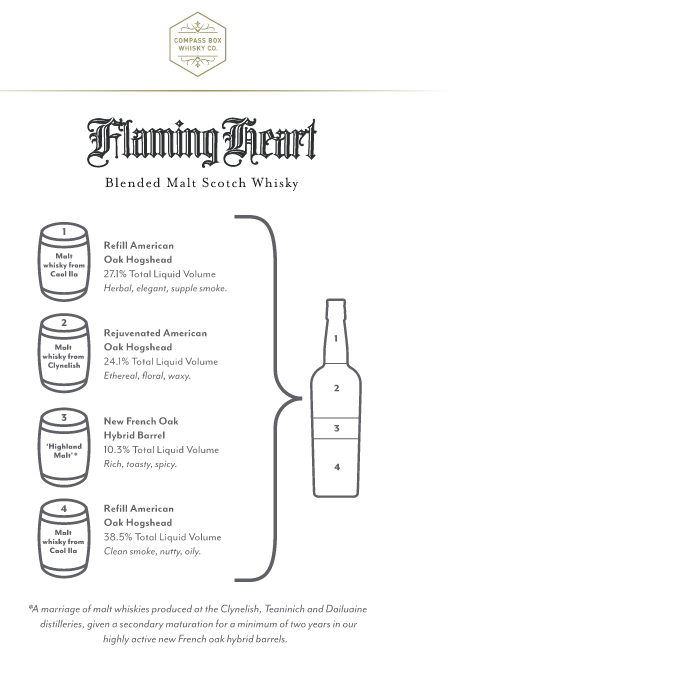 So there it is. Now you, the customer knows.

Well done John Glaser & Compass Box for doing what is right. Shame on you SWA for acting like a bitch.

5 thoughts on “Compass Box vs SWA”