Review
It’s been a while since my last review mainly because I’ve been making an effort to scale back a bit. I’m running a marathon in a couple of months so training is taking priority over whisky drinking.

I did, however, come out of this temporary hiatus to attend a Kilchoman tasting organized by our local whisky distributor. To top it off Peter Will from the distillery was at hand to talk to us about his wares.

Before I settle down to talking about what I drank there was a cool bottle of smoky Kilchoman bramble liqueur that Peter had brought with him to make cocktails out of. While the bar thought it would be a good idea to make vodka cocktails I was adamant that this would taste only good mixed with the Kilchoman Loch Gorm. And I was right! 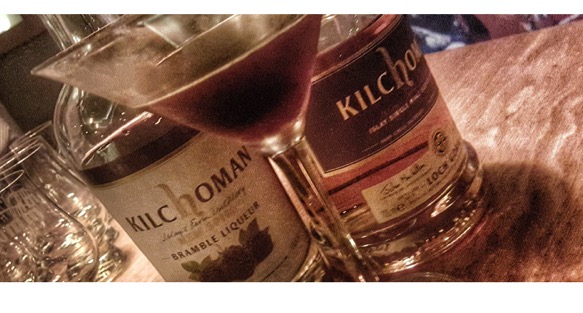 Managed to get some seriously good flavors out of this mix.

Once we got our palates reasonably ready it was time to taste, among others, this 4th edition of the 100% Islay release.

100% Islay is made from barley that is grown on the newly acquired Rockside farm (opposite the distillery) which is then processed, mashed and distilled before being laid down in the Kilchoman warehouses to produce a whisky made from 100% Islay ingredients. Hence, the name.

Palate: Lime. Citrus. Barley. Smoke. Mild spices. Pear drops. Gets sweeter over time. Hint of milk chocolate. Quite herbaceous. I prefer the nose, to be honest. There’s a touch of something raw here. Not terrible, mind you. Just not up to Kilchoman’s lofty standards that’s all. 21/25

Finish: Quite drying. Oak. Spice rub. Again not as stellar as I expected. But not bad. 21/15

Overall Comments: I think this is decent whisky. Maybe I’m too used to being blown away by Kilchoman all the time. But that’s OK. I like the fact that this one is unapologetically Islay complete with minor flaws. Like the island itself. And I’m happy to live with that.

What is nice is that I managed to spend a lot of time with Peter discussing the travails of running a distillery in todays’ day and age. And I have to admit I was not envious.