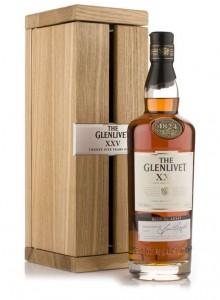 Review
There are some whiskies that entrance you for some reason and for me The Glenlivet XXV was one of them. It was gifted to me by a friend a couple of years ago and, for sentimental reasons, I chose not to open it. Instead two years later I purchased a new one intending to open it with the same friend as a New Years treat.

Looks like I’m a victim of some serious batch variance and happened to snag a less than stellar bottling. This one was bottled on January 21, 2013 and bears the Batch# 0910A. So have a look before you decide to shell out US$350 for a bottle.

Nose: The nose is extremely promising coming at you with an almost bourbon like quality. Strong citrus layered in dark honey, boiled sweets and butterscotch with some Quality Street chocolates. But then a disconcerting whiff of fresh linen which can only lead me to believe the presence of sulphur. It’s not terribly off-putting but it certainly does not belong there.

Palate: The palate. The disappointing palate. Watery. Mediocre. The same chocolate and citrus but now some nuts, cinnamon and banana. But something a touch off. The sulphur? Maybe

Finish: The finish is goes up in a puff of mild dark pepper leaving me shaking my head in disappointment.

Not the best way to round off the year.